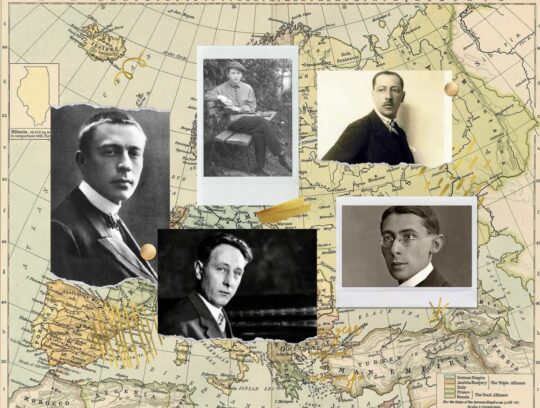 (for violin and piano)

(for cello and piano)

Our programme of trios and duos are by composers whose destinies were shaped in one way or another by the political upheaval and wars of the 20th century.

We open with Sergei Rachmaninov’s first piano trio, “Trio élégiaque”. Composed in 1892 when he was a mere 18 years old, this one movement work already demonstrates the intense emotion and expressiveness which characterise his music. It was composed as a tribute to the famous Russian composer Tschaikovsky, who was a great supporter of the young Rachmaninoff. The repetitive opening theme, a four-note rising motif, if played backwards, has the same rhythm of the opening descending motif of Tchaikovsky’s first piano concerto. This reference would no doubt have been apparent to listeners at the time. Ironically when Rachmaninov fled Russia in 1917 following the Bolshevik Revolution, he was forced to set aside his compositional work to concentrate on a career as a concert pianist. One of his calling cards was Tschaikovsky’s 1st piano concerto.

Soviet composer, Dimitri Shostakovich composed his 1st piano trio in 1923 when he was still studying at the conservatory in Petrograd – formerly Saint Petersburg and then renamed Leningrad after the death of the Russian Revolution leader Vladimir Lenin in 1924. Like Rachmaninov’s trio it is a one movement piece with moments of poignant Romanticism intermingled with passages of starkness and angularity which would become a ‘Shostakovich’ trademark. He trod a fine line of fitting in with Soviet politics intermingled with periods in his life when he was denounced as being ‘an enemy of the people’. He once described life in Stalinist Russia as ‘unbelievably mean and hard. Every day brought more bad news and I felt so much pain. I was so lonely and afraid.”

The following two pieces in our programme appeared in various incarnations until they took on their present form.

Igor Stravinsky, like his compatriot Rachmaninov, arrived in the West thanks to the Russian Revolution. When the national borders closed due to the outbreak of World War I, he and his family were left stranded in Switzerland and were unable to return to Russia till 1962. Both he and Rachmaninov worshipped Tschaikovsky and in 1928, when Stravinsky was asked to compose a ballet inspired by Tchaikovsky’s music he jumped at the challenge. The ballet, “The Fairy’s Kiss” was composed in 1928 for the thirty-fifth anniversary of Tchaikovsky’s death. Stravinsky very quickly created a scaled down concert suite of the ballet which has since been adapted for violin and piano.

The “Variations on a theme of Rossini” by Czech composer Bohuslav Martinu was composed for the great Russian cellist Gregor Piatigorsky and was one of the first compositions Martinu completed in the US in 1942, after he fled Nazi occupied Europe. The journey though from the original aria from Rossini’s opera “Moses in Egypt” to Martinu’s witty and virtuoso variations makes for quite a story. The inspiration did not come directly from Rossini at all but from a variation in the “‘Moses variations” for violin, composed by the celebrated daredevil of violin playing, Nicolo Paganini. This piece is famously played only on one string – allegedly Paganini composed this piece while in jail on the one remaining string left on his violin! It’s proper title really should be, “Variations on a variation from Paganini’s Variations on a theme by Rossini”, but that’s rather long and confusing for a title – don’t you think!

Our programme ends with the “Variations on a Viennese Heurigen Melody” by the Austrian-British composer Hans Gál. Written in July 1914, the title refers to the Viennese ‘Heurigen’ wine restaurants, where, to this day, the current vintage (‘Heuriger’) is served in November and December accompanied by food and music. The theme for the variations is a popular Heurigen melody, but Gál also cleverly incorporates the well-known tune ‘O, du lieber Augustin: known to us here in the UK as the Scottish folk song, “Did you ever see a lassie?”. The cheerful character of this work captures the prevailing light-hearted mood in Austria in the heady days prior to the outbreak of the Great War. On the eve of WWII, due to his Jewish heritage, Gál, together with his family was forced to flee to London and eventually to Edinburgh where he remained for the rest of his life, becoming a popular and highly respected member of the city’s musical circles, and a co-founder of the Edinburgh International Festival in 1947.